Julie Andrews once sang, “The hills are alive with the sound of music.”  In Zadar, Croatian coastline is alive with the harmonious sounds of the ocean. 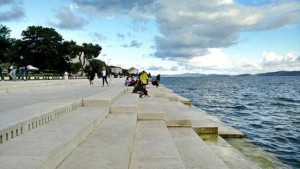 Tourists of Eastern Europe are flocking to the natural wonder of Zadar’s sea organ, or as locals refer to it the ‘Morske Orgulje’, a structure built alongside the coastline of the Adriatic Sea.  The sea organ is made up of marble steps and slits for the cascading water, which lead to polyethylene tubes and a large cavity that creates a harmonious sound as the wind carries the waves in and out of the marble slits.  The hypnotic sound is almost indescribable; simultaneously creating a sound that is ominous and calming, evoking feelings of tranquility and mystery as you are mesmerized by the unending cascade of splashing waves. 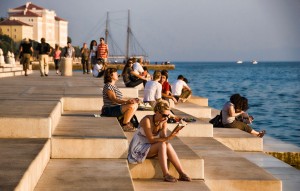 According to the Zadar tourist board the expanse of stairs along the coastline available for tourists and locals to sit and lounge is 70 meters.  The sea organ is composed of 35 pipes of varying sizes that, at any given moment, play seven different chords and five different tones.  The music never stops as the sea waves billow and beat up against the shiny marble.  The Zadar sea organ ranks in the top ten of must-see attractions when visiting Croatia. 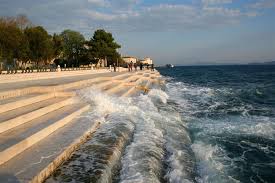 Zadar is one of Europe’s oldest regions, tracing back to the stone age.  The war-torn city welcomed this architectural addition, which was created by Nikola Bašić, in 2005.  Previously, the coast was lined with concrete walls, a temporary solution to the devastation the city faced from World War II.  The marble steps of the sea organ has reinvented the area, creating a tourist attraction and a nice spot for locals to enjoy a picnic lunch, take in the sights and gain a new appreciation for nature. 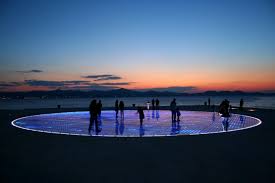 Architect, Nikola Bašić, was praised for the architectural feat receiving the European Prize for Urban Public Space in 2006.  Nikola Bašić has become known for utilizing idyllic locations with natural elements and creating architectural marvels.  In follow up to his sea organ creation, Nikola Bašić created ‘Greetings to the Sun,’ another Zadar marvel that has to be seen to be believed.  A circle of glass plates, embedded into stone, spend the entire day soaking up the rays and energy of the sun, then create a spectacular light show at night that ebbs, flows and appears as if it’s responding to the rhythm of the nearby sea organ.

To learn more about the Croatian sea organ, visit Earthables or the Zadar Tourist board website.

How to Best Explore Puerto Rico