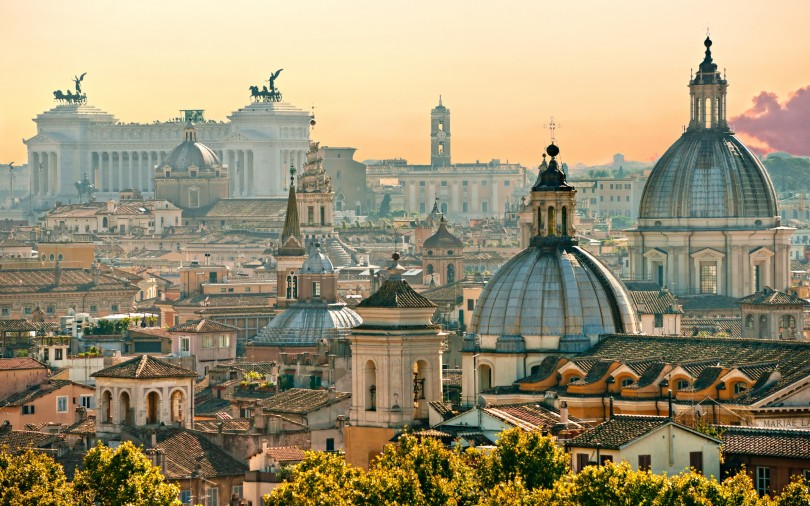 Rome, Italy is one of the world’s most visited cities and there are innumerable meritorious reasons for sojourning here.  The magnificent city is home to significant cultural and historic attractions and possesses an unforgettable beauty that is truly unique.  Here is a list of 10 must-see attractions for your Roman holiday: 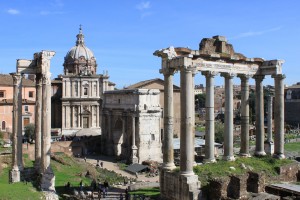 Once the palatial estate of famous Roman emperors including Caesar and Nero, the Roman Forum is centuries-old, yet leaves awe-inspiring remnants of its former glory for tourists to explore.  Architectural columns built thousands of years ago indomitably remain where the town’s city hall once stood.  Three civilizations have been excavated in the assiduous archaeological task of preserving the integrity of Ancient Rome.  Historic figureheads including Julius Caesar and St. Paul once walked the grounds or were confined in the humble prisons.  Visitors to the Roman Forum are literally glimpsing a level of esoteric history when visiting this hallowed place. 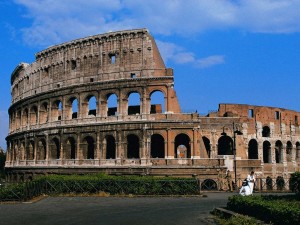 Tickets for the Roman Forum and The Colosseum may be bought in tandem as the sites are in walking distance to one another.  The Colosseum is a stone amphitheater which, according to Fodor’s travel guide, dates back to A.D. 70-72 and served as the site of gladiator-type games and fights.  A brutal source of entertainment for the community, the Colosseum has a rich and storied past, leaving behind eerie remnants of its former glory.  The background of the massive Colosseum (which measures 620 x 513 ft) makes for a picturesque backdrop and the inside of the Colosseum allows tourists to envision the bloody combats that took place over the centuries. 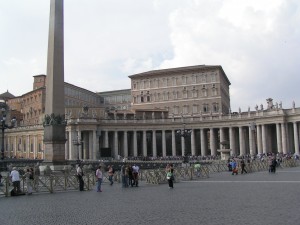 A sovereign and independent state, Vatican City is home of the Catholic Pope.  Passersby may walk in the Vatican courtyard and visit the famous St. Peter’s Basilica, a Renaissance-style church that serves as the burial ground to its namesake, St. Peter, as well as former popes. 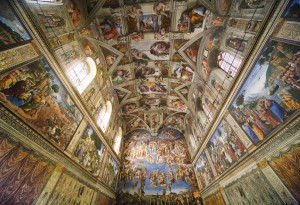 Guests may stroll the monumental Basilica with its museums and statuary and even brave the narrow staircase to the top of the Dome, which boasts incredible views of the city.  Within Vatican City are several museums as well as the Sistine Chapel, a cultural and artistic triumph, and home of world famous artwork by Michelangelo and other historic Renaissance painters and artists. 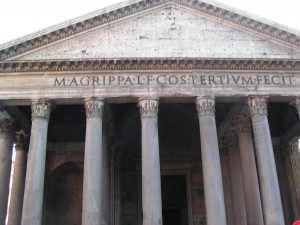 An architectural feat, The Pantheon has endured the test of time.  This incredible structure which was erected between 118-128 A.D. as a temple for worshiping pagan gods. 500 years later it was converted to a Christian temple, and remains in use today. It is considered the most influential and preserved building in Rome, and according to Fodor’s travel guide, possesses an ingenious design complete with a dome that has an opening at its peak, allowing the sun to hit every inside crevice.  The famous structure is a beloved tourist haunt and an absolute must-see for travelers to Rome. 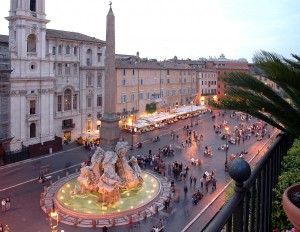 Piazza Navona is one of the many public squares in Rome and arguably the most picturesque.  Make an afternoon visiting the gorgeous Piazza which is surrounded by ristorantes, gelaterias and stunning churches including Santa Maria della Pace.  The centerpiece of Piazza Navona is Fontana dei Quattro Fiumi, a spectacular fountain honoring four rivers of the four major continents. A product of the Baroque Period, the Piazza is not short on statues and glorious monumental works of art. 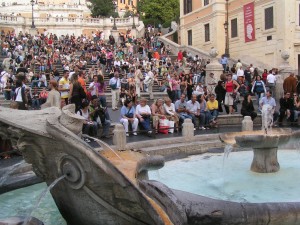 Rome’s Spanish Steps lend a cultural flair to the city.  Wedged in-between two buildings with a fountain at the stair’s descent and the Trinità dei Monti church at the top, this section of the city is home to several world-famous fashion and couture houses.  A romantic culmination to an afternoon in Rome, the Spanish Steps offer a great place to sit, reflect, and immerse yourself in the sights while enjoying a café or gelato. 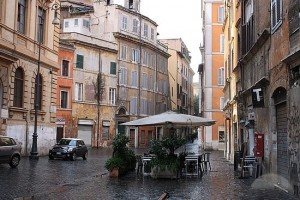 The Roman Ghetto is a preserved Jewish community which is home to Jewish restaurants and cuisine, as well as shops.  The gorgeous community is comprised of old world architecture and has become known for its excellent preservation of Jewish culture.  The charming district is located between Campo de’ Fiori and Piazza Venezia and is a favorite among Roman travelers. 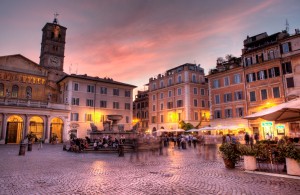 The cobbled streets of Trastevere are lined with ancient architecture featuring shops and al fresco dining restaurants serving classic Italian cuisine.  The charm of Trastevere is complete with delicate vines and lush landscaping meandering up the walls of the ancient buildings.  Visitors to Rome’s Trastevere will enjoy shopping at various boutiques selling sundries as well as world class jewelry and crafts.  The neighborhood is bustling with immense charm and fantastic photo opportunities. 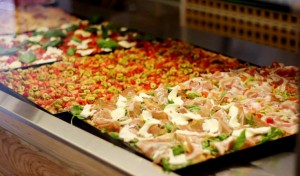 Italy features cuisine that is very specific to each region.  In Rome, Pasta with Carbonara or Amatriciana sauce is classic Roman fare, as are braised oxtails several dishes featuring artichokes.  Romans also eat their pizza Neopolitan-style, referencing “thin crust.”  Roman pizzerias boast individual charm and unique menus, and most are family-owned for generations.  Homemade pizza sauce, fresh herbs and mozzarella di bufala atop a thin, crusty dough will surely satisfy any pizza craving.  Treat yourself to world famous Italian gelato for dessert. Be sure to brush up on your Italian words before visiting the gelaterie – fragola (strawberry) anyone? 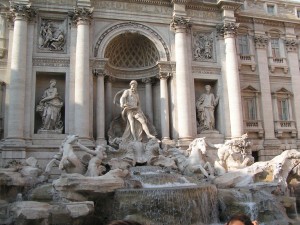 Rome’s world famous Trevi Fountain serves as an incredible ceremonial destination of this famous city.  Legend has it that travelers who throw a coin behind their shoulder into the fountain are destined to return.  Join thousands of tourists who bid farewell at the fountain each day and make sure to snap a photo.  The famous fountain is encircled with statuesque monuments with Neptune (the god of freshwater and the sea) erected front and center.