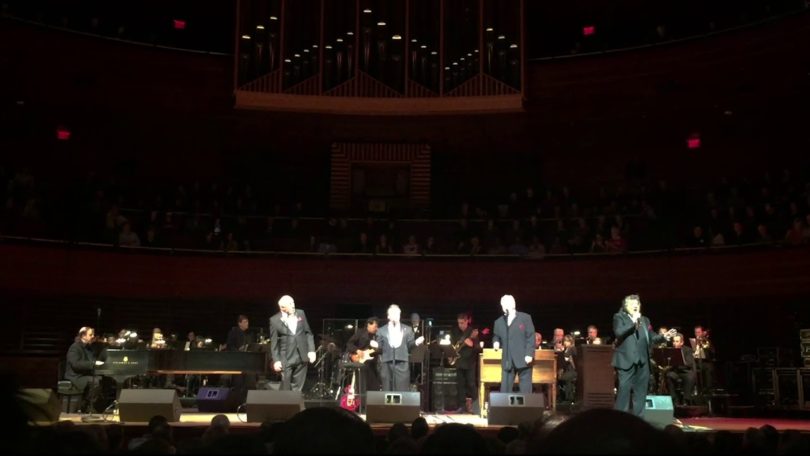 From the sidewalks of Philadelphia to the hearts and minds of music fans all across the country, Billy Carlucci resonates with a vast history of quality songs.  In the sixty-plus years that followed his first high school harmonies, he has brought his vibrant voice and songwriting skills to multiple bands and doowop groups.  Today, with new recording and show still bringing timeless sounds to a multitude of dedicated fans, Billy Carlucci & The Essentials enjoy a nomination for Best Music Maker category from the East Coast Hall Music of Fame. 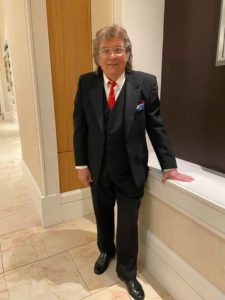 The simple singer and songwriter who became a true pioneer and legend of the 60s doowop sound has influenced the history of American music in a big way.  Today, he and his band attract audiences and album buyers with as much fervor as ever.

It is not just his own group and live performances that pad his resume of greatness.  Billy Carlucci is a golden thread the winds of the fabric of musical royalty and classic TV and radio shows.  This man of 500 songs represents the type of dedication to the entire industry that transcends celebrity and his own interests.

A long-standing monument to music like the one he has created needs a firm foundation.  From childhood, he felt the siren song of the musical world call him from the classroom and in front of any audience stopped to listen to his unforgettable voice and style.  Fans feel the same pull today to a master at his craft who exudes the type of energy and passion only demonstrated by a true lover of music.

The Man Behind the Music 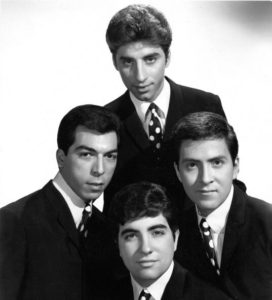 Music classes at John Bartram High School had Billy Carlucci rubbing shoulders with would-be greats like Patti La Belle.  His structured learning spilled over onto the sidewalks of the city where he sang and harmonized with other music fans.

His early years put them in contact with other up-and-coming artists like Arnie Silver, later of the Dovells, and Danny Rapp.  He and these other two collaborators formed Little Billy and The Crystals.  Although the name of the group spoke to their clear and resonating sound, it was changed to Little Billy and The Essentials once the album “The Dance Is Over” hit the number one position in Philadelphia music charts.

As with many legendary music careers like Billy’s the moment of discovery with The Crystals sparked a conflagration of musical influence that would span over 50 years.  Producer for Danny and the Juniors, a group that came out of the same high school, John Madara, and Dave White recognized talent when they saw it.  [i] Madara supported the foundation of Billy’s new singing group and led them to their first record deal with the Landa label of Jamie Records. 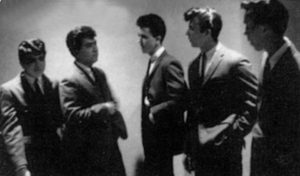 In 1959, Billy Carlucci’s first singing group formed with Michael Lenihan, Phil D’Antonio, John Caulfield, and Peter Torres.  The earliest demos were presented to Madara and a demo shared by Danny Driscoll to his record label sparked what would become a very long musical career.

“The Dance is Over,” a song with lyrics full of regret of a lost love, would herald the start of something big.  In short order, it went from a new song announcement on WCAM and WIBG radio shows to the Top 10 in Philly music.  That number one hit began Billy Carlucci’s climb to household name in the pop music scene. 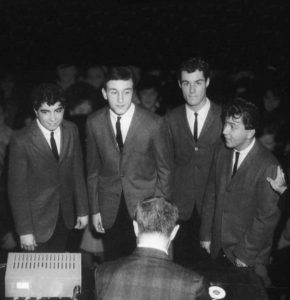 Billy Carlucci & The Essentials continued to release songs like “Over the Weekend” and their updated version of “Babalu’s Wedding Day” throughout the late 50s and 60s.  They moved from Jamie/Guyden group to the Smash label for Mercury. 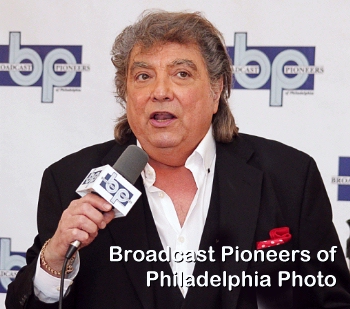 From the radio and record stores to the biggest venues in Philadelphia, Atlantic City, and beyond, the group has attracted enough attention to be considered one of the true formative influences of the east coast doowop scene.

Besides working continuously with The Essentials, Billy joined with the group he started adjacent to in the early days.  He stayed with Danny and the Juniors for 17 years and released a few songs like “Let’s Get Together” as Billy and Dawn.[ii]

When Billy Carlucci and The Essentials ended their recording career, the popular lead did not fade into obscurity like too many other artists did.  Instead, Billy Carlucci shifted to writing songs for other artists, collaborating with other groups, releasing solo work, and getting involved with other acts as mentioned above.

Billy and Dawn released songs like “Let’s Get Together” and “Oo-Wee Baby.”  Billy sang for the 1910 Fruit Gum Co. group in 1967 with the well-known tune, “Goody Goody Gum Drops.”  Not one to sit back and relax, Billy Carlucci also released solo work throughout this time period such as “Mind Reader.”

Danny and the Juniors gave him his next long-term platform for writing, producing, and singing some of the most memorable music from the 1960s and 70s.  This propelled him further onto the international stage.  The group toured not only across the United States but also throughout Canada and even in Europe.  Billy Carlucci’s dedication to giving the fans what they love showed clearly in the fact that he never missed a single performance.

500 Songs That Touched the Music World 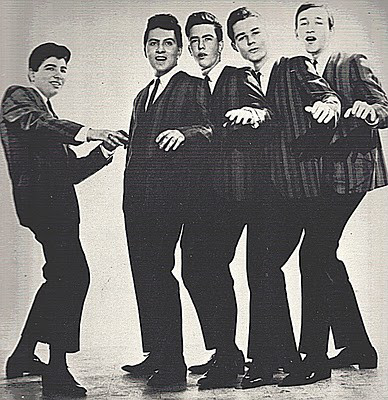 No doubt exists that the songs Billy Carlucci & The Essentials recorded and performed throughout their storied career affected how doowop music is remembered by fans both new and old.[iii] His time with Danny and the Juniors only added to his amazing repertoire.  An impressive discography only begins to touch the contribution of this skilled songwriter.  With claims of over 500 songs penned, performed, or produced by him, Billy is one of the most productive contributors to his and other groups over the decades.  Some of these include:

Besides writing songs for his groups and others to record and perform, his talents extended to write and arrange a wide variety of unique material for television and Las Vegas shows.  He launched the production company called Whitelaw & Carl Productions as Billy Carl.  From this position, he was able to help wide variety of artists get their start and expand their own popularity on the music scene.

Nearly everywhere fans look, they can see the influence of this highly professional, amazingly talented, and super dedicated man.  His singing career would be enough to catapult him into the top ranks of pop and doo-wop artists.  However, it is his decades of dedication to every aspect of music creation that makes him virtually an unstoppable force.  From the first small clusters of music fans clapping or tapping their toes on the sidewalks of Philadelphia to those who never turned off songs from that genre, Billy Carlucci touches the eager ears and hearts of music fans.

His public appearances happened on air as much as they did on stage.  Over the years, Billy Carlucci appeared on the Dick Clark Show and Sha Na Na to sing a variety of well-known doowop songs like “At the Hop” and “Twistin’ USA”.[iv]  He also showed up on American Bandstand, Solid Gold, and Midnight Special.  The list of radio programs and talk shows that featured Billy Carlucci would take too much time to cover in detail.

What Is Billy Carlucci Up To Today? 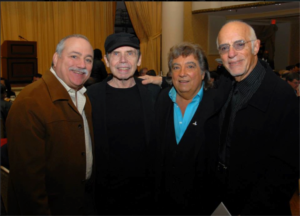 International tours with Danny and the Juniors kept Billy Carlucci busy and entertaining audiences up until 1989.  Appearances did not stop throughout the 90s and early 2000s.  The group entertained the crowd at the 2000 RockFest in 2002 and were a part of the Twist World Record event orchestrated by the Philly Pops during their 40th anniversary year in 2019.[v]

Recent albums include the Billy & The Essentials Christmas Album and their Anniversary 55 release.

There is no way to keep Billy Carlucci away from the music.  With lifelong dedication, he continues to explore new ways of expression and opportunities to bring those favorite doo-wop harmonies and simple tunes to people still hungry for that sound. 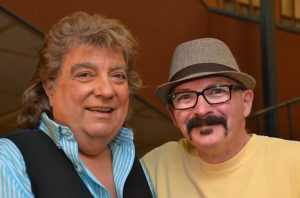 The East Coast Music Hall of Fame stands as the ultimate preservation and celebration organization when it comes to the history of music from Maine to Florida.  President and CEO Tommy Petillo knows quality and gives out awards every year in many important categories.

For 2020, Billy Carlucci & The Essentials enjoy the nomination for Best Music Maker – Vocal Group/DooWop.[vii]  The commercial success of the group spans decades.  The dedication of the fans still reverberates today, and they come out in droves for concerts and to purchase recent album releases.  This type of long-term focus and influence on the music scene of the east coast and the country makes the nomination an exceptional choice.

Any discussion of doowop music and the history of east coast sounds is not complete without talking about Billy Carlucci.  From his humble beginnings as a high school harmony singer to today’s Hall of Fame nomination, no doubt exists that he has played an essential role in the history of these musical stylings.

Whether looking back fondly on dancing around the living room to “Maybe I’ll Be There” on a 45 record or tuning in for his radio show every week, Billy Carlucci has undoubtedly been as much of an influence on fans as he has been on commercial music.  Although he had his hand in the making of over 500 songs, one single one is enough to represent the excellence he brings to the doowop scene.