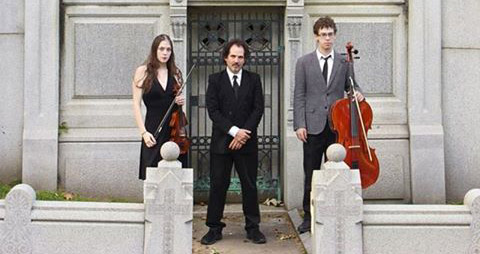 Music’s abstract quality can easily take a backseat when listening to an electrifying performance by professional concert thereminist Mano Divina and the eight-piece-string Divine Hand Ensemble, whose eclectic repertoire covers a gamut of musical choices, from breathtaking operatic arias to vibrant renditions of popular songs. The group’s musical improvisations are powerful and expressive, effectively rendering the intangible palpable.

Aside from the captivating musical performances of Mano Divina and the Divine Hand Ensemble, the choice of instrument–a theremin–is also worth noting. Also known as an etherphone, a theremin is an electronic instrument invented by Lev Termen, a Russian engineer who was successfully awarded a patent for the device in 1928. The pitch, volume, and cadence of the musical instrument are controlled without need for physical contact. By carefully trained hand movements, the thereminist harnesses the “electricity in the air” brought about by the instrument’s specially designed antennae’s ability to create an electromagnetic field. Normally associated with the production of eerie sounds, a theremin was used in Bernard Herrmann’s musical score for The Day the Earth Stood Still and Miklós Rózsa’s Spellbound. So, it’s truly fascinating that Mano Divina takes on a theremin to render soulful arias and chamber music. Then to have the Philadelphia-based Divine Hand Ensemble–which is an unconventional double quartet of two harps, a cello, a viola, a glockenspiel, and two violins–helmed by Divina’s expertly agile command of the theremin is sure to bring an unforgettable stage presence. 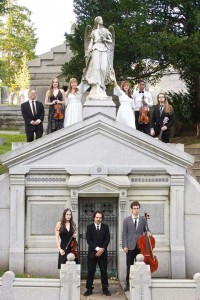 Wildly talented, Divina and his eight-piece ensemble dazzle their audience without resorting to pretentiousness. Their musical renditions are thoroughly distinctive and hands-down dynamic–expressive at times and ethereal in others. Plus, there is something uniquely enriching in a form of musical entertainment wherein science meets magic in a daring fusion that does not only sound naturally pleasing to the ears but is also downright fun.

A feature on Montgomery News tells of Mano Divina’s passion and drive, charting how he handpicked the talented musicians who make up the Divine Hand Ensemble. The fact that he spent ten years training himself on the use of an obscure and excruciatingly complex electronic instrument that is not originally associated with operatic arias and orchestral music–the usual fare played by this one-of-a-kind team of musicians–demonstrates Divina’s rare and intriguing gift–a curiosity buoyed by prodigious talent, imagination, innovative flair, and determination. Although he never sings during the group’s many concerts, Divina trains with a voice coach in order to better interpret arias through the theremin’s delicate and temperamental “singing” electromagnetic field.

With their varied repertoire that spans improvisations of classical music, elegiac funerary hymns, sacred choral songs, and punk rock, Mano Divina and the Divine Hand Ensemble can flawlessly customize their performances. They can also cater across the differing genre preferences of music fans. Garnering praise for their performances, the group had a string of successful presentations locally and internationally. They can be contracted for just about any occasion, including theatrical events, benefits, funerals, and weddings.

To read more articles of entertainers, check out: Hooked on Entertainment