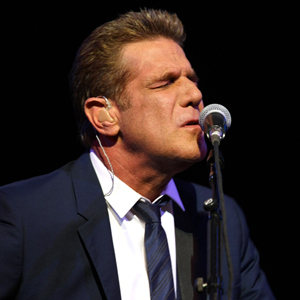 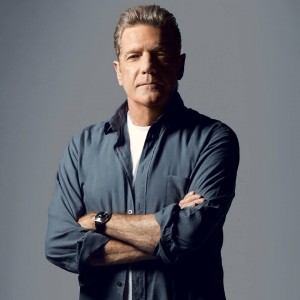 With a deep love of music, a mission to make his mark in the industry, and a work ethic that rivaled the hardest working people in the business, Glenn Frey achieved extraordinary levels of respect and success in the entertainment industry.  Co-founder of the iconic rock band the Eagles and successful solo artist, Frey didn’t just “accomplish” his goals – he transcended them.  Glenn Frey has prevailed for over 40 years in an industry where one-hit wonders and music superstars often fall as quickly and spectacularly as they arise.  To-date the Eagles have sold over 150 million records and remain one of the best-selling bands of all time. 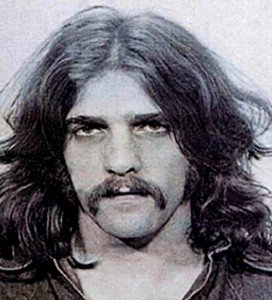 Glenn Lewis Frey was born in Detroit, Michigan on November 6, 1948. Growing up in nearby Royal Oak, Glenn began studying piano at the age of 5; however, he switched to guitar and in his teenage years became involved in the Detroit rock scene. While a student at Dondero High School, he was part of the Subterraneans, and later played with another local rock band, The Four of Us. After graduating from high school in 1966, Glenn Frey and four other musicians formed The Mushrooms, and convinced Detroit rocker Bob Seger to write the band’s first song. 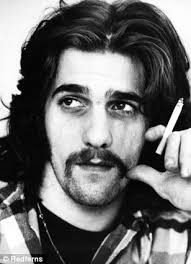 The young guitarist got his first big break in 1968 at the age of 19 when he performed acoustic guitar and sang background vocals on Bob Seger’s single, “Ramblin Gamblin’ Man.”  The friendship and songwriting collaborations between the two legendary rockers endured throughout Glenn Frey’s life.

Glenn Frey moved from Detroit to Los Angeles in 1969, where he was introduced to another Detroit native, singer-songwriter J. D. Souther.  They formed the songwriting duo Longbranch-Pennywhistle, played in the club scene of West Hollywood, and released a self-titled album that same year.  Frey was also introduced to emerging rock and folk star Jackson Browne, who lived in the same apartment building as Frey and Souther.  At the youthful age of 21, Glenn Frey had established solid connections in southern California’s burgeoning rock and folk music scene. 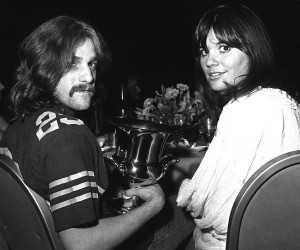 In 1970, Glenn Frey met drummer Don Henley when folk star Linda Ronstadt (Souther’s girlfriend) needed a backup band for one of her shows.  She hired the two artists, along with bassist Randy Meisner of the band Poco, and guitarist Bernie Leadon from The Flying Burrito Brothers for the gig.  The four young artists cut their teeth in the rock star world when they were retained for her band’s 1971 tour.

“Life In The Fast Lane” 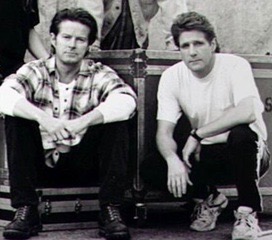 When the Ronstadt concert tour ended, Glenn Frey and Don Henley founded the Eagles with Meisner and Leadon.  The band cut their debut self-titled album in 1972 and logged their first billboard hit, “Take It Easy,” which was co-written by Frey and Jackson Browne.  Eagles reached platinum level sales, a feat which is rarely accomplished on debut albums.  The Eagles were quickly on their way to rock star status, and by the mid-70s they had become one of the most popular bands in the world.

Glenn Frey’s songwriting talent became evident as the Eagles music quickly ascended Billboard charts.  He and Don Henley wrote many of the band’s hit songs, and from 1972 through 1976, the Eagles released a platinum-selling album each year: 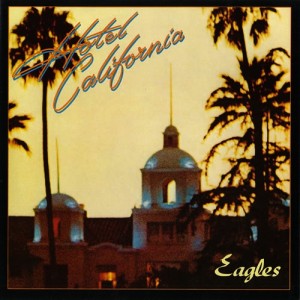 With their classic country-rock sound and trademark breezy harmonies, Glenn Frey and the Eagles landed five number one hits.  “One of These Nights,” “Best of My Love”, “New Kid In Town”, and “Heartache Tonight” each peaked at #1 on Billboard’s Hot 100.  Yet their fifth #1 hit, the title track from the band’s 1976 album, Hotel California, became the most popular song the Eagles ever released.  “Hotel California” was co-written by Frey along with Henley and Don Felder, who had joined the group in 1974.  The album went a whopping 16x platinum, won the 1978 Grammy Award for ‘Record of the Year,’ and is widely heralded as one of the best rock albums ever.  Joe Walsh joined the band in 1975, and successfully contributed his edgy and enthusiastic rock style to the band’s transformative and unique sound.

When the Eagles disbanded in 1980, Glenn Frey embarked on a successful solo career.  His single “The Heat Is On” was featured in 1984’s blockbuster film, Beverly Hills Cop, and peaked at #2 on Billboard music charts.  He quickly followed with another #2 single, “You Belong to The City,” which was featured on NBC television’s multi-award winning series, Miami Vice. 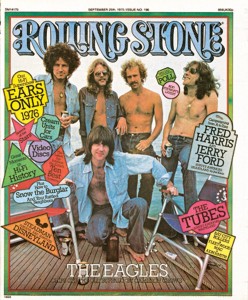 As a solo artist, Glenn Frey also wrote and recorded “Smugglers Blues,” which inspired one of the show’s episodes, and featured Frey as a cast member.  He also appeared on the big screen when he was cast in the role of General Manager for the Arizona Cardinals in 1996’s Jerry Maguire, directed by Cameron Crowe.  20 years earlier, Crowe had been a writer for Rolling Stone Magazine, and interviewed Glenn Frey and the Eagles for what became an infamous 1975 cover story.  That biographical interview later inspired Crowe’s 2000 Academy Award winning movie, Almost Famous. 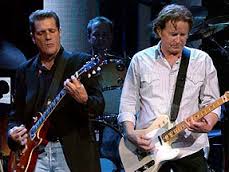 Glenn Frey and fellow Eagles band members remained friends long after their 1980 breakup.  Glenn Frey and Don Henley were frequently asked when the Eagles would get back together, and as a joke they both would reply with the comment, “When hell freezes over.”  Although the response was meant as an amusing pun, it often fueled unsubstantiated rumors that the artists were angry and bitter with each other.  So when Frey and other band members reunited in 1994 to record a new album, they aptly titled it, Hell Freezes Over.  The album received incredible response, and the band soon embarked on their When Hell Freezes Over reunion tour.  During the tour, Frey often told their sold-out audiences, “For the record, we never broke up. We just took a 14-year vacation.”

“Long Road Out of Eden” 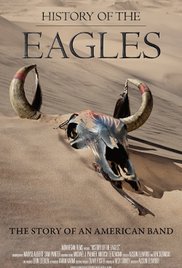 In 2007, Glenn Frey and the Eagles released their tenth studio album, Long Road Out of Eden, and embarked on a three-year tour.  And in 2012, Frey released After Hours, his first solo album in 20 years.  That release was followed in 2013 by a critically acclaimed and Emmy Award-winning Showtime documentary, History of the Eagles.  Shortly after the series aired, Glenn Frey and the Eagles embarked on a a two-year tour of the same name.

In 2015, continuing a 44-year epic ride of best-selling albums, sold-out concerts and incomparable success, the Eagles were announced as one of five recipients of the Kennedy Center Honors.  However, in November the Kennedy Center announced that due to Glenn Frey’s health issues, they would postpone honoring the Eagles until 2016, when each member of the Eagles – Glenn Frey, Don Henley, Joe Walsh, and Timothy B. Schmit – could attend.  The 67-year Frey had been suffering from rheumatoid arthritis for several years, and the medications he was taking for treatment of symptoms had left him vulnerable to infections. 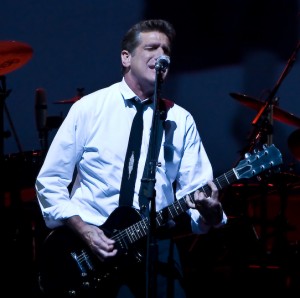 On January 18, 2016, Glenn Frey succumbed to acute ulcerative colitis and pneumonia, results of the side effects from his arthritis medications.  The rock icon’s final public appearance with the Eagles was on July 29, 2015 when the band wrapped their History of the Eagles tour in Lousiana.  Without Glenn Frey there will sadly be no “Peaceful Easy Feeling” later this year when the Eagles accept their Kennedy Center Honors lifetime achievement award.  Glenn and his wife, Cindy Millican, have three children: Taylor, Deacon and Otis.  Cindy, a dance choreographer also suffers from a chronic inflammatory disease.  She and Glenn were actively involved in fundraising and awareness efforts for Lupus LA, and co-hosted several events and benefit concerts.

“Take It to The Limit” 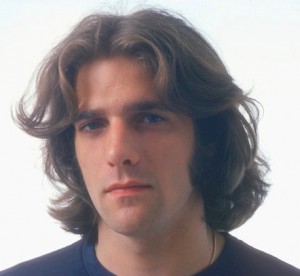 Glenn Frey and the band he co-founded won six Grammy Awards and five American Music Awards.  Six of the Eagles’ ten albums topped charts at #1, and five singles landed at Billboard’s coveted #1 position.  The band was inducted into the Rock & Roll Hall of Fame in 1998, the first year they were nominated.  And as a solo artist, Glenn Frey released 24 singles which reached the Billboard Hot 100’s Top 40 list.  This chronicle of achievements surely gives new meaning to the band’s 1975 hit single, “Take It To The Limit.”