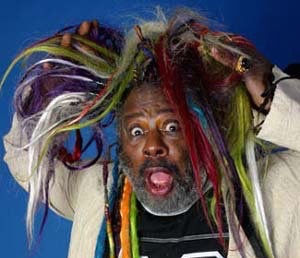 When New Jersey native George Clinton hit the music scene in the 1970s with his particular brand of sci-fi meets techno funk music, the world was all ears.  As frontman and mastermind for the bands Parliament, Funkadelic, and P-Funk (often referred to as P-Funk Allstars), this multi-talented singer, songwriter, bandleader and music producer is best known for his ingenious brand of the cosmic-atomic-techno funk subculture which dominated the ’70s.

The Rise of ‘Dr. Atomic’ 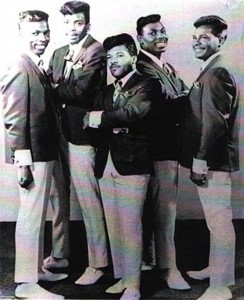 George Clinton (‘Dr. Atomic’) was born in 1941 in North Carolina, but grew up in Plainfield New Jersey.  As a teenager in the ’50s, he was strongly influenced by Mambo, where he absorbed the vibrant costumes and artistic dances of the genre.  While still in high school, George Clinton formed the doo-wop/barbershop group The Parliaments in 1956.  Exploring a variety of sounds, lyricism and technology, The Parliaments forged their unique musical brand while styling hair The Silk Palace in Plainfield. 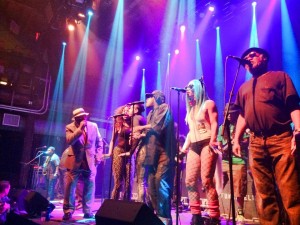 George’s passion for music eventually led him to New York, where he followed current pop trends from the Beatles to Motown to The Rolling Stones, R&B and the formative funk sounds of James Brown and Sly Stone.  By the early 70s, Clinton had literally forged his own creative path in the formation of two primary bands – Parliament, and Funkadelic. Signing with Capitol Records the groups produced over 40 R&B hit singles, including three #1 hits and three platinum albums, and dominated the wildly creative and diverse music trends of the 70s. 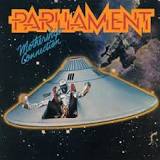 The album peaked at #4 on the US R&B charts, achieved platinum status in sales, and is considered by music professionals as the group’s finest recording.  In 2011, the Library of Congress declared, “[t]he album has had an enormous influence on jazz, rock and dance music,” and added Mothership Connection to the National Recording Registry.  As their popularity grew in the late ’70s, George Clinton, Parliament and Funkadelic embarked on spectacular, electrifying tours, which culminated in a giant spaceship descending from the rafters.

In 1982, George Clinton signed with Capitol Records as a solo artist and as P-Funk Allstars.  The same year, he released ‘Computer Games’, a collection of funk and R&B tunes which peaked at #3 on US R&B Charts.  His album single, ‘Atomic Dog’, reached #1 on US R&B charts, and has been featured in several films.  Clinton’s 1983 studio album release, ‘You Shouldn’t Nuff Bit Fish’, featured the artist’s signature funk and R&B styles combined with more mainstream rock influences. 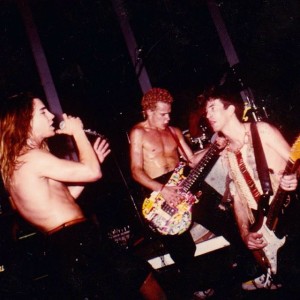 From R&B to funk to rap and hip-hop, George Clinton’s musical influences have transcended pop music.  In 1985, George Clinton produced ‘Freaky Styley’, the second studio album of The Red Hot Chili Peppers, who were huge fans of Clinton’s funk style.  He also wrote the vocals and lyrics for the album’s title track.  Clinton continues to collaborate with the popular alternative rock group, as well as other artists. 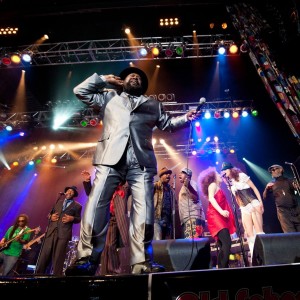 The self-proclaimed ‘Dr. Atomic’ served as inspiration for Dr. Dre as he sampled Clinton’s beats in his G-Funk gangsta-rap variations.  Clinton has also toured with the Lollapalooza Music Festival, and collaborated with other hip-hop and rap artists including Lil’ Kim, Mix Master Mike, the late Tupac Shakur and Snoop Dog. His reach, however, extends far beyond hip-hop and funk.  Working with music legends Santana, Kid Rock, Bootsy Collins, and countless others, George Clinton continues to leave his indelible mark on the music industry. 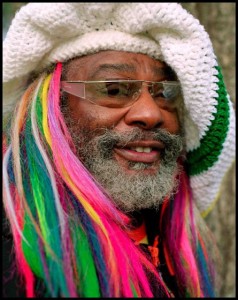 George Clinton has worked in recent years with the National Black Caucus, tirelessly advocating for the intellectual property rights of African-American musicians.  In 2012, he teamed with the Caucus at ‘Unsung, Unshaken and Uncompensated’ to fight against the undervalued treatment and plight of these artists.  Clinton also teamed with Red Bull Music Academy at their 2012 event, CultureClash, where artists connect with top DJ talents.

In 2012, George Clinton also teamed with the Berklee City Music Network when he spoke at their Memphis conference, and hosted a master class free of charge at the Stax Music Academy. The program offers contemporary music education to children in underserved communities located at 37 sites throughout the country. 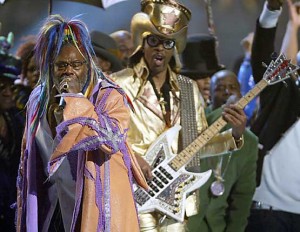 The beat goes on – in 2013, Oxfam America and KCRW presented George Clinton with the Vanguard Award for his efforts in raising awareness of the famine caused by the Sudan Darfur conflict.  George Clinton’s Memoir, ‘Brothas Be, Yo Like George, Aint That Funkin’ Kinda Hard On You?’ is also filled with insights, stories, and highlights of the legendary musician and funk master. 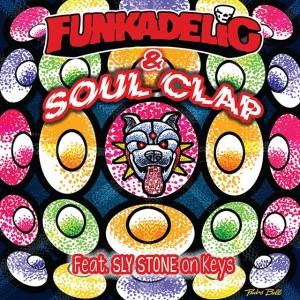 George Clinton recently launched his own record label, The C Kunspyruhzy, and collaborated with Sly Stone on ‘The Naz’, his first single from the label, and his first official new Funkadelic release in over 20 years.  He recently joined forces with Philly Soul Man Bobby Eli, and is recording a new cd scheduled to be released soon.  George continues his nearly 60-year career in music by touring extensively throughout the world.